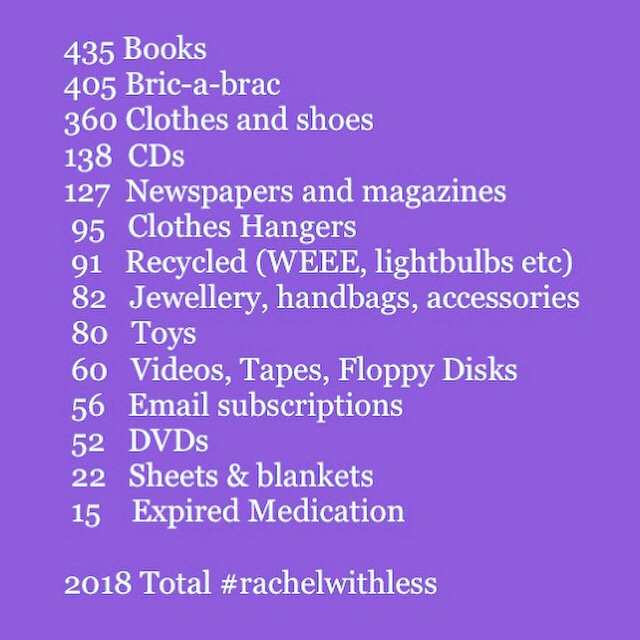 So I’ve made it to the half way mark on my year long decluttering challenge and I’m glad to say I’ve decluttered 2018 things at this point. When I set myself this challenge back in February I really didn’t have any sort of target in mind. I simply needed to sort out a large room in our house filled with mainly my stuff. As I progressed the room got worse to begin with as I slowly decluttered stuff from around the house and it became the head office for sorting it all out. Now at the half way mark, I’m happy enough with every other room and my ‘decluttering head office’ has greatly improved. I’ve made countless trips to the local clothes bank, charity shop and recycling center. And I’ve read a few books and listened to numerous podcasts on decluttering, organizing and Minimalism. I’ve learned a lot. Now I simply need to keep going and get through the rest of the stuff. I also now have a clearer vision for what I’d like to achieve by the end of the challenge namely:

1) I need to finish certain categories that I’ve already done an initial cull of – clothes, books and miscellaneous items.

2) I want to sort, organize and scan (where appropriate) all my photographs so that they are saved up on my hard drive and to the cloud – this is a major undertaking considering I loved and still love to take photographs.

3) I want to sort, organize and scan (where appropriate) all my paper work into just a few key files – again a major undertaking since I like to keep everything!

4) I’ve set another interim target of decluttering 3000 items but I’ve no doubt that I will reach this if I include all the paperwork and photos I’ve yet to go through so fingers crossed.

It hasn’t been easy to find the time to do this with three small children. Doing a bit daily is the only way I can do it at the moment. Staying motivated is key because it is taking such a long time. I have to say that the support I’ve had on Instagram has been brilliant. I’ve also got great inspiration from following others on Instagram who are doing similar and facing the same struggles in their decluttering. But ultimately I’ve already seen improvements in the house – there is more space, it takes less time to clean and tidy up, the kids now play much better in a tidy, less cluttered play room and my feelings of being overwhelmed, although not completely gone, have certainly improved. So reminding myself of these benefits is keeping me going. Here’s to the next six months.